The best (and crazy) photo gear at the Photokina 2018! 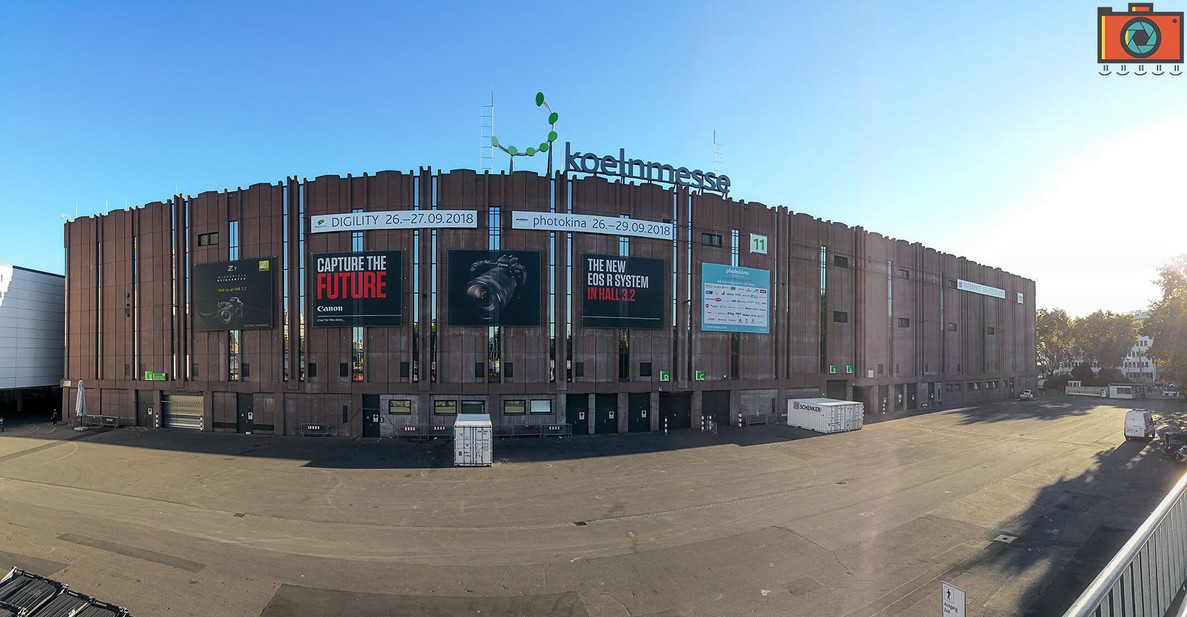 Hello and thank you for being here!
Also this edition of Photokina 2018 has ended and will probably be remembered as the edition of the mirrorless full frame (FF). Big brands like Canon, Nikon, but also Panasonic have formalized their entry into this niche market now occupied only by Sony.
This year has been a great year, certainly the edition richest of innovations ever! Almost all the biggest brands presented new photographic equipment or brought prototypes under development.

Let's see together the most interesting, crazy and/or outside the box photo gear of this Photokina 2018!

As PhotoGear4Fun I was also lucky to do a quick test of the Canon EOS R system with the new lenses supplied, including the amazing Canon RF 28-70mm f/2L USM! From Sigma I tested their new and crazy 10x telezoom Sigma 60-600mm f/4.5-6.3 DG OS HSM Sports and furthermore I could not not test a bit 'the new Nikon Coolpix P1000, having already the excellent and valid Nikon Coolpix P900 (in this post "Photo at the ISS on the Sun? A superzoom camera is OK!" you can see how a similar superzoom camera, although with its limits, can give very interesting results!) 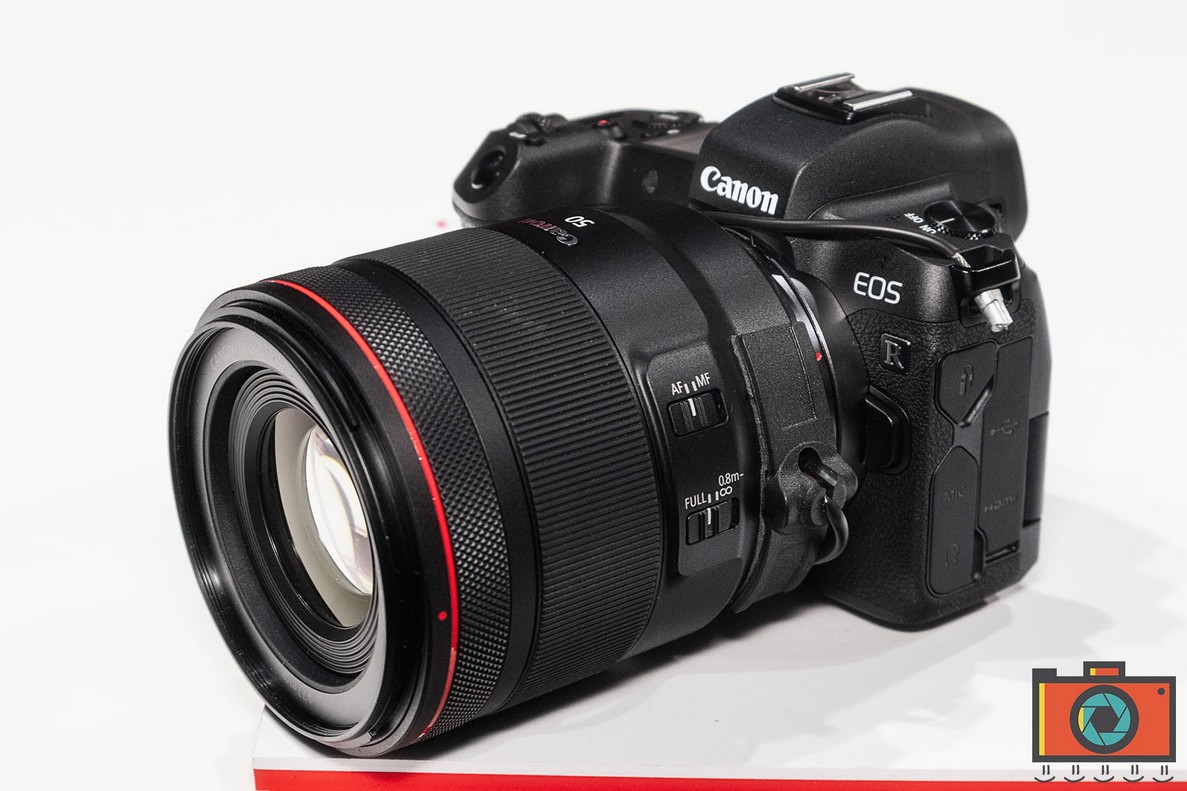 A modern reworking of the legendary Canon EF 50mm f / 1.2 L USM. It will follow a dedicated article, but compared to the original it is completely different. Rich of sharpness already at wide open @f/1.2! 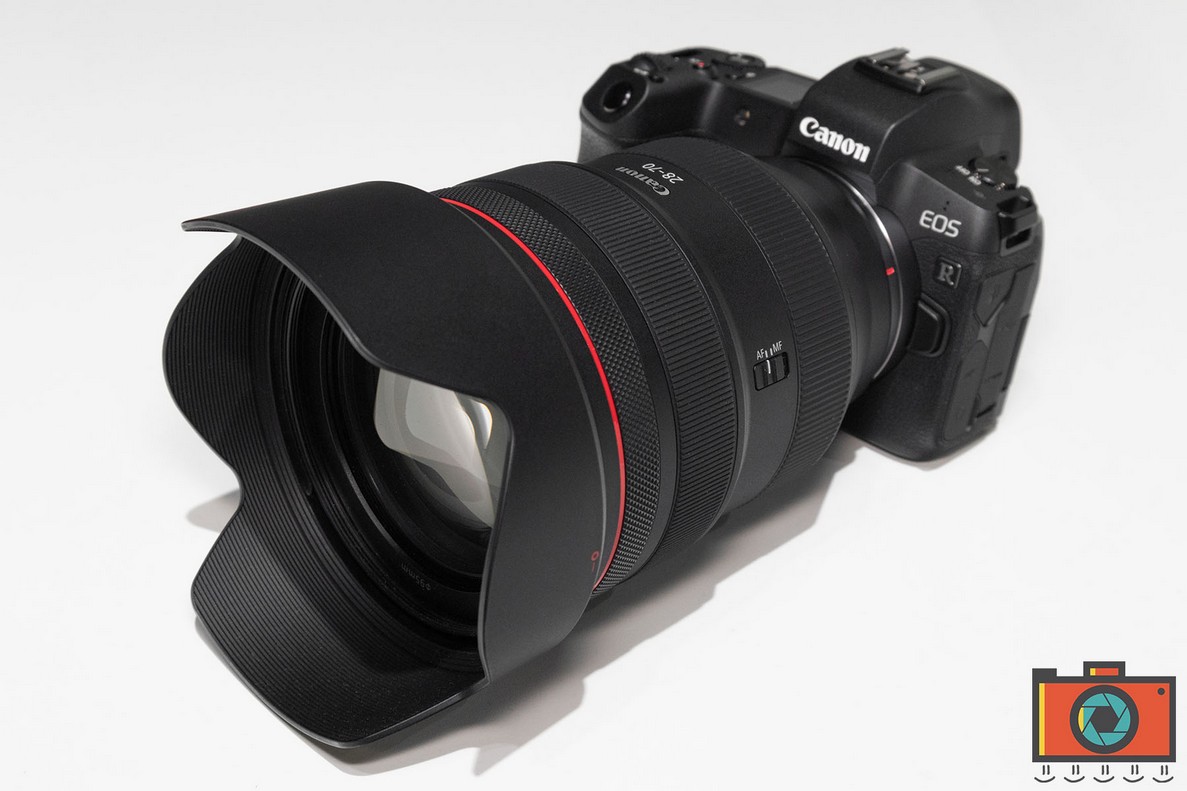 A totally new lens in the photographic world, previously of similar existed only the Sigma 24-35mm f/2.0 DG HSM Art, great lens and a bit wider than this new Canon, but with a much smaller focal range.
Also for this lens, a dedicated article will follow, with the addition of downloadable test photos. Although of considerable size, I was pleasantly impressed by this lens.
FUNNOMETER (first impression): 5/5 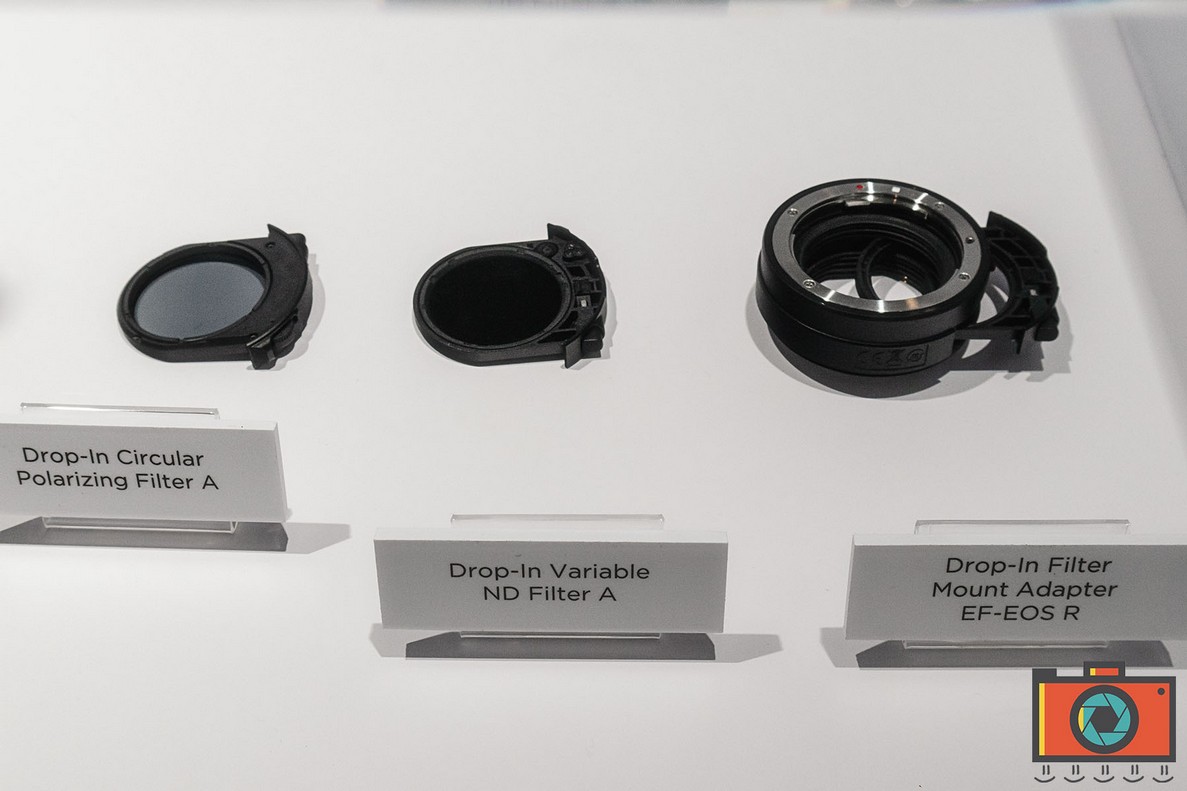 It's a bit like the Columbus' egg in the field of adapters. In practice, thanks to it not only is it possible to mount on Canon EOS R the very large optical park dedicated to Canon EF / EF-S, but FOR ANY LENS you can use the same Neutral Density Variable filter or Circular Polarizer filter! This is really a great innovation, because it allows you to save hundreds of dollars, if not a thousand dollars in filters! It also allows you to use the filter (V-ND or C-PL) on lenses on which screw filters can not be used! An example on all, the extreme wide-angle Canon EF 11-24mm f/4 L USM! 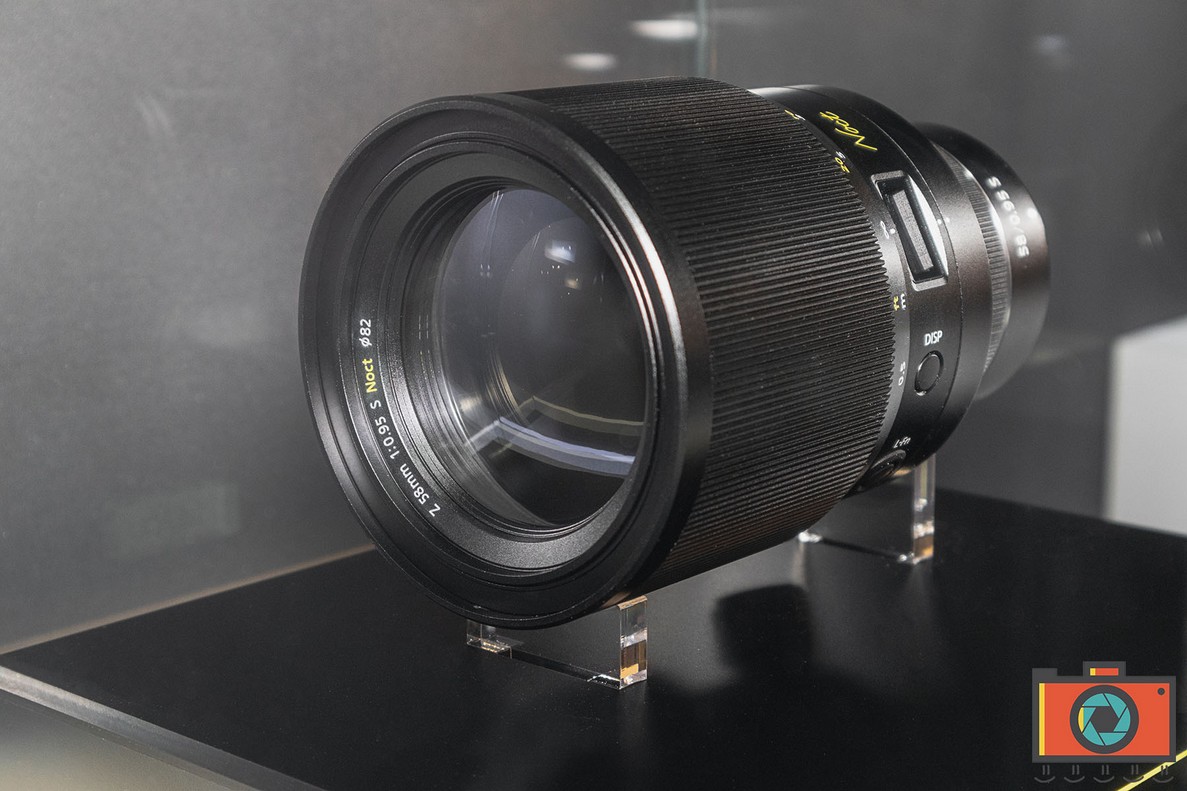 Lens simply crazy! Still under development this lens continuing to make the news. Compared its focal length it is enormous, totally manual. Perhaps more a style exercise than a lens designed for practical use, but ... it's extremely fascinating! 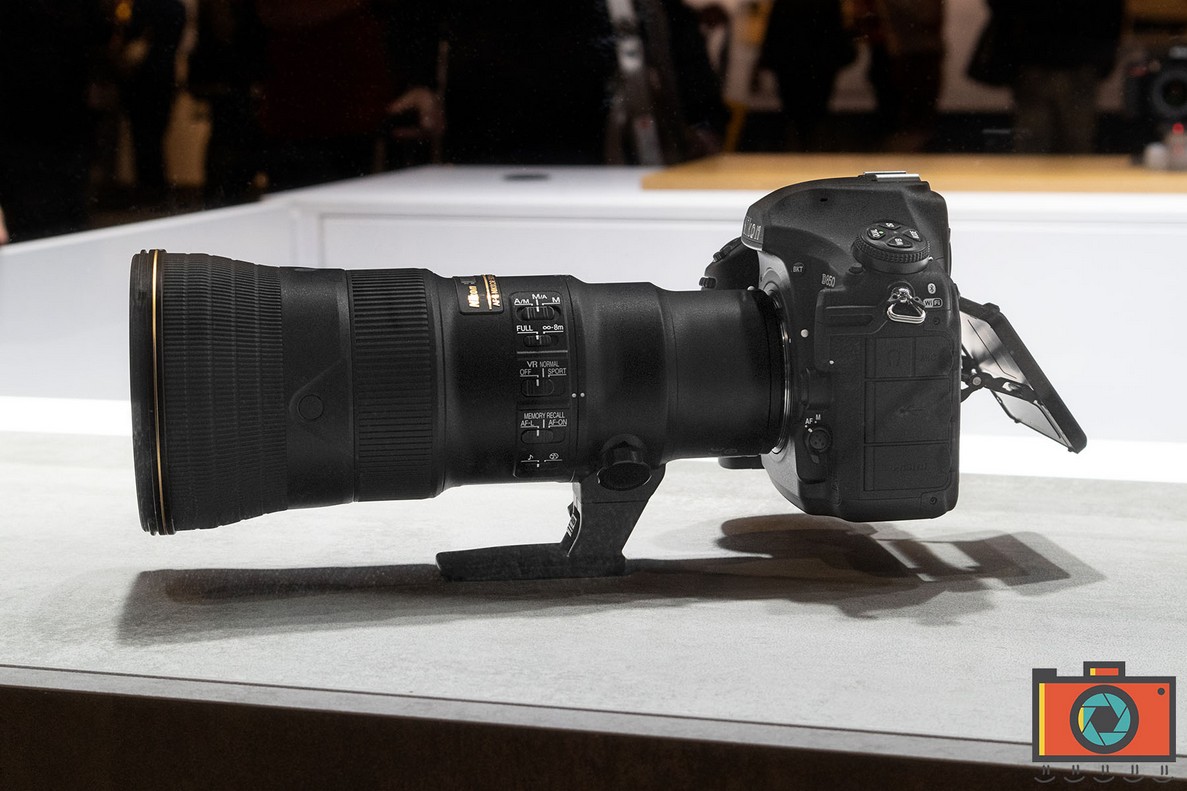 Extremely interesting lens, never before was seen a supertele of such compact dimensions as to be big and heavy like a 70-200 f/2.8! This is thanks to an optical scheme that includes among its elements a Phase Fresnel (PF) lens [with Nano Crystal Coat treatment].
FUNNOMETER (first impression): 5/5 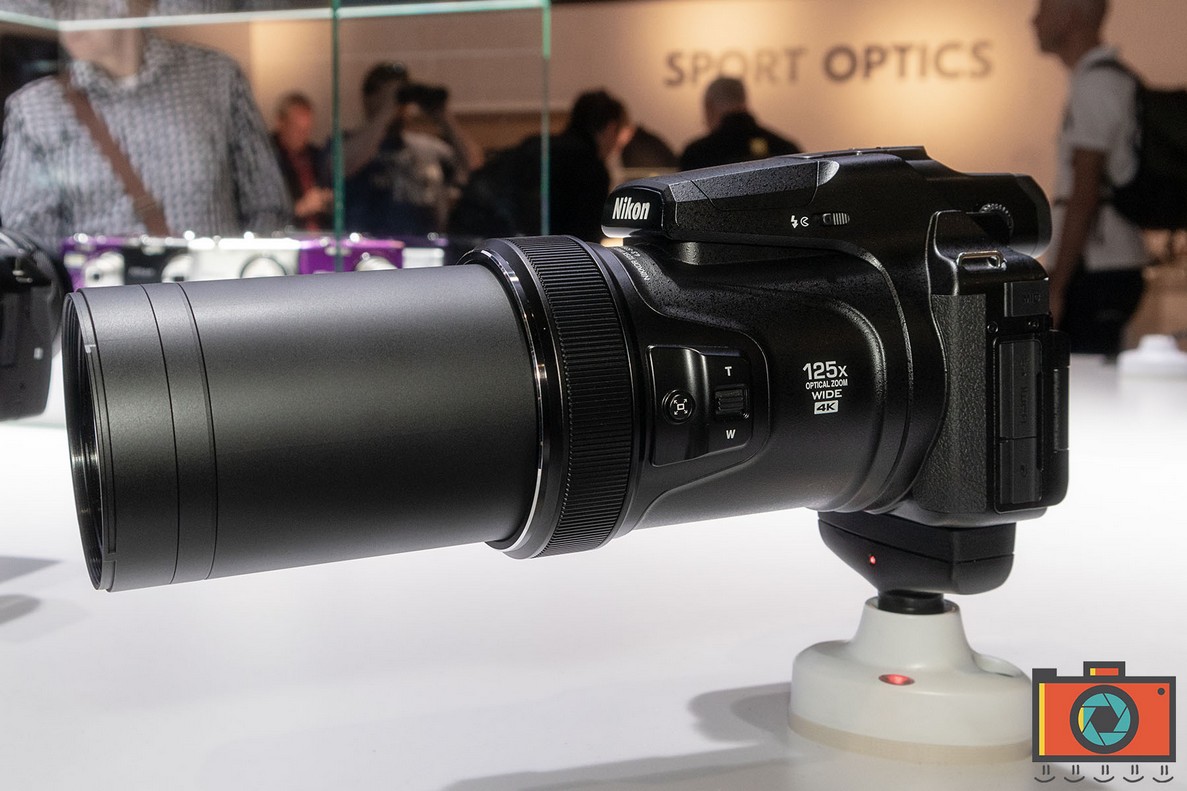 New model of the Nikon Coolpix P900 superzoom reference camera. Even more extreme, it boasts a zoom that extends from 24 to 3000 mm (in the 35 mm format). Compared to the previous one also has a very good 0.39-inch OLED electronic viewfinder with 2.36 million points and 4K video capability. A dedicated article will follow, with the addition of downloadable test photos and direct visual comparison with the Nikon Coolpix P900. 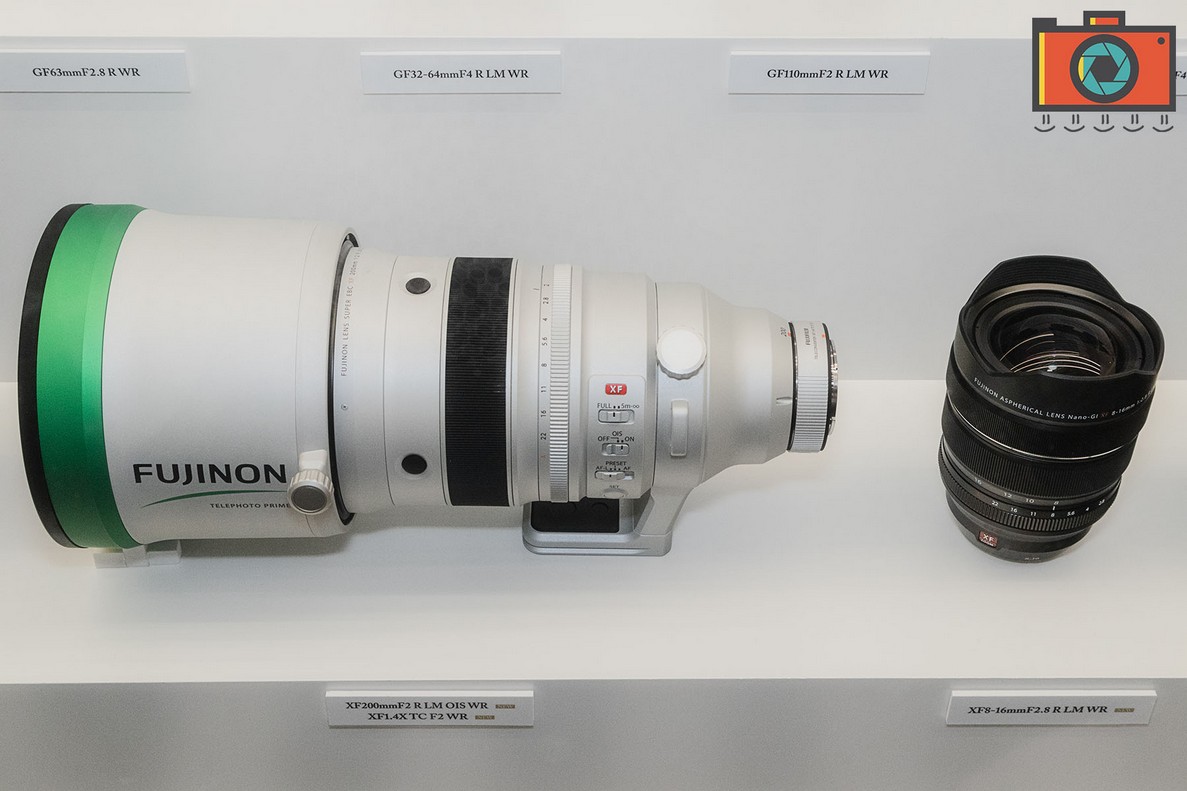 Very interesting and specialized lenses for the APS-C system by Fujifilm. They are both of considerable size, but promise to be at the TOP for their category. The 200mm f/2 can be compared to a 300 f/2.8 on FF system and it is designed for those who take sports photos, the 8-16mm f/2.8 can instead be compared to a 12-24 on FF, so a focal length extreme. Thanks to its being very bright and ultra wide-angle it will certainly be an interesting lens for those involved in landscape astrophotography with a Fuji camera. 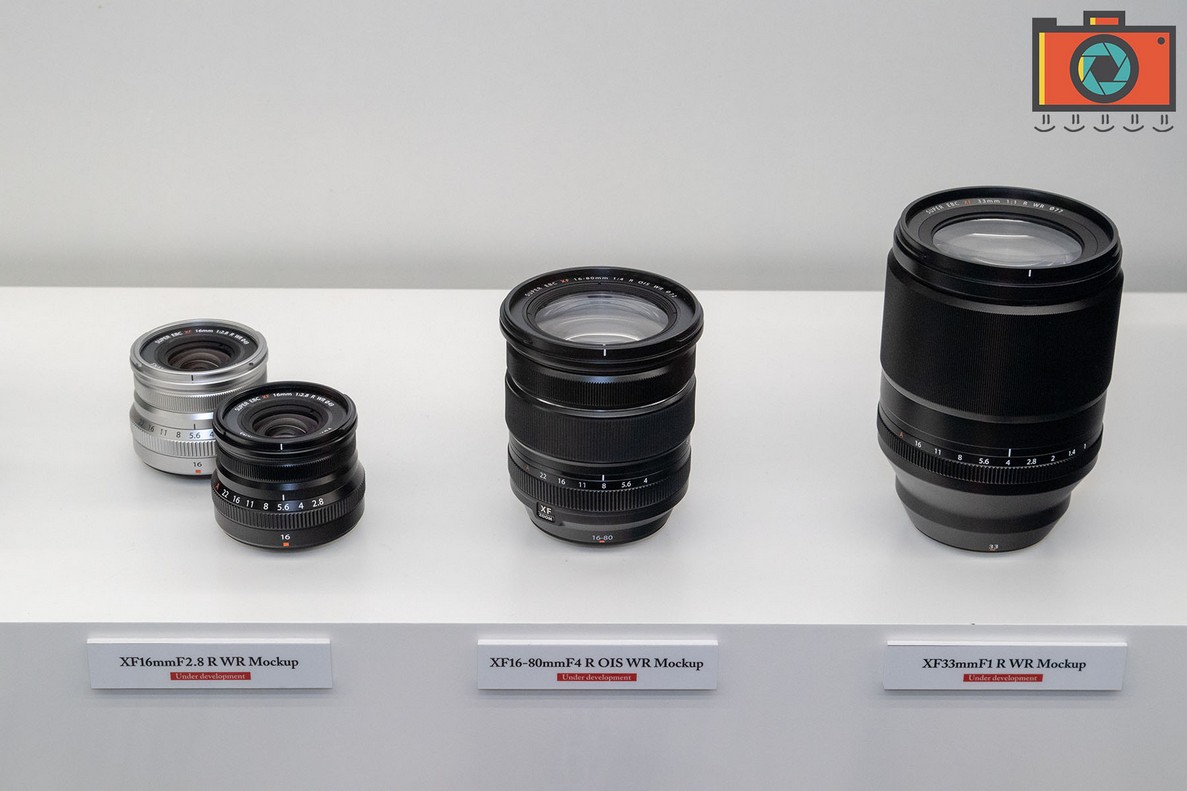 This lens is still under development and has been repeatedly the subject of rumors in recent years. A similar lens for APS-C system with AF was never developed. Comparable to a 50mm f/1.5 on FF, the lens promises really good and it will be a best seller for bokeh lovers. In the photo are also visible other lenses in development, although with more normal characteristics. These are the Fujifilm XF 16mm f/2.8 R WR and the Fujifilm XF 16-80mm f/4 R OIS WR. 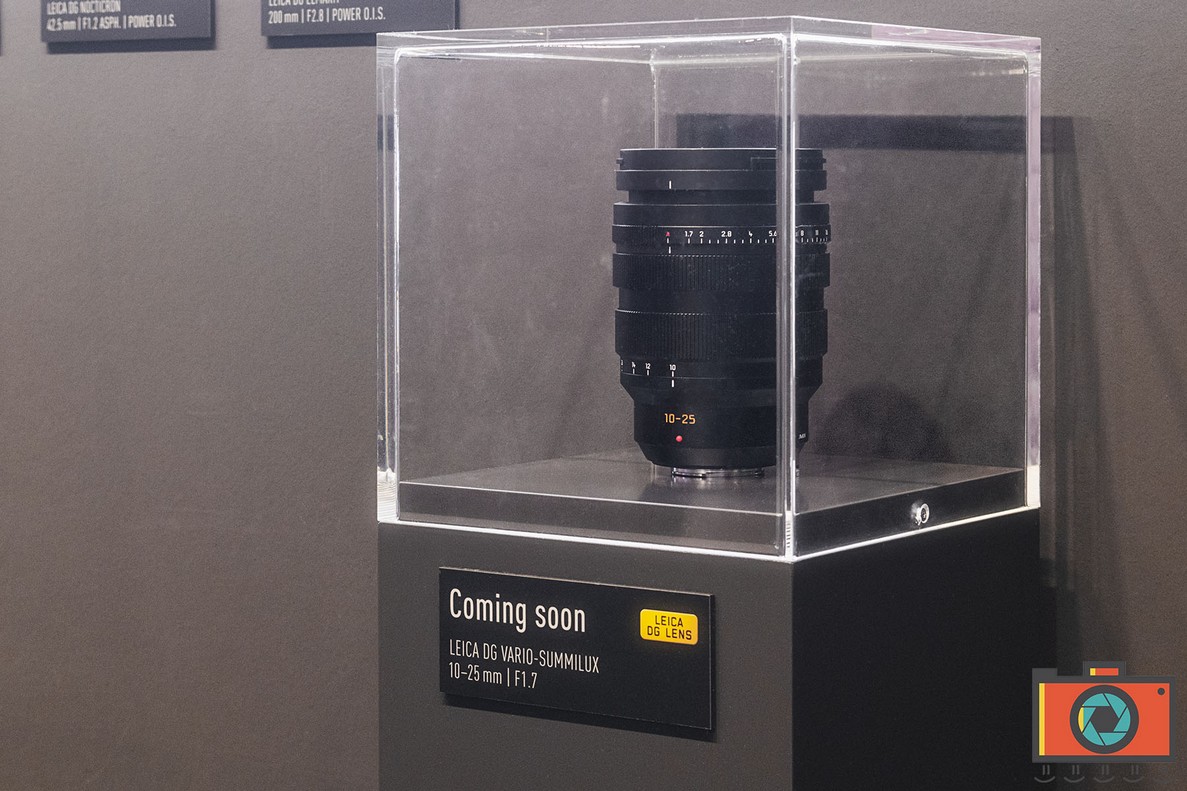 Wide-angle lens and zoom of great interest this, thanks to its exceptional brightness of f/1.7 on the entire focal range! Possibility to mount the screw filters and the ring of the diaphragms are a PLUS. Thanks to its characteristics it will certainly be a lens to be considered for those involved in landscape astrophotography with the Micro Four Thirds cameras. 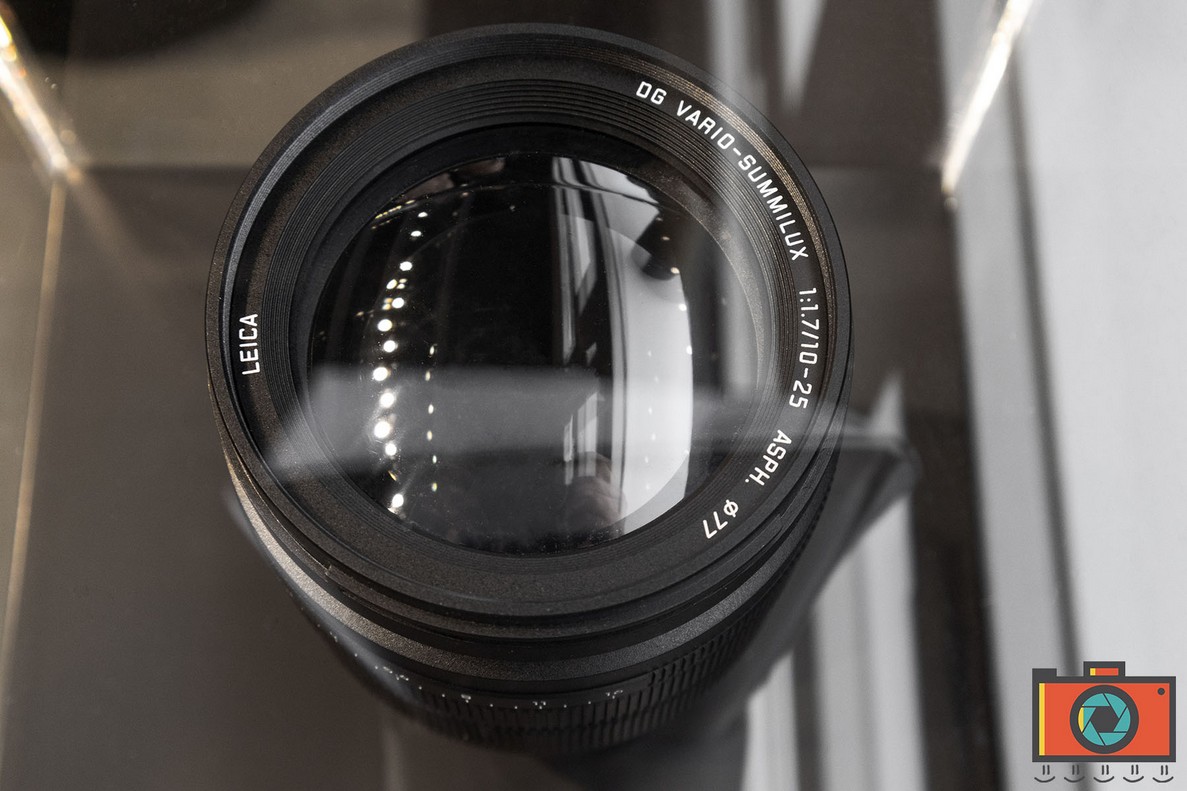 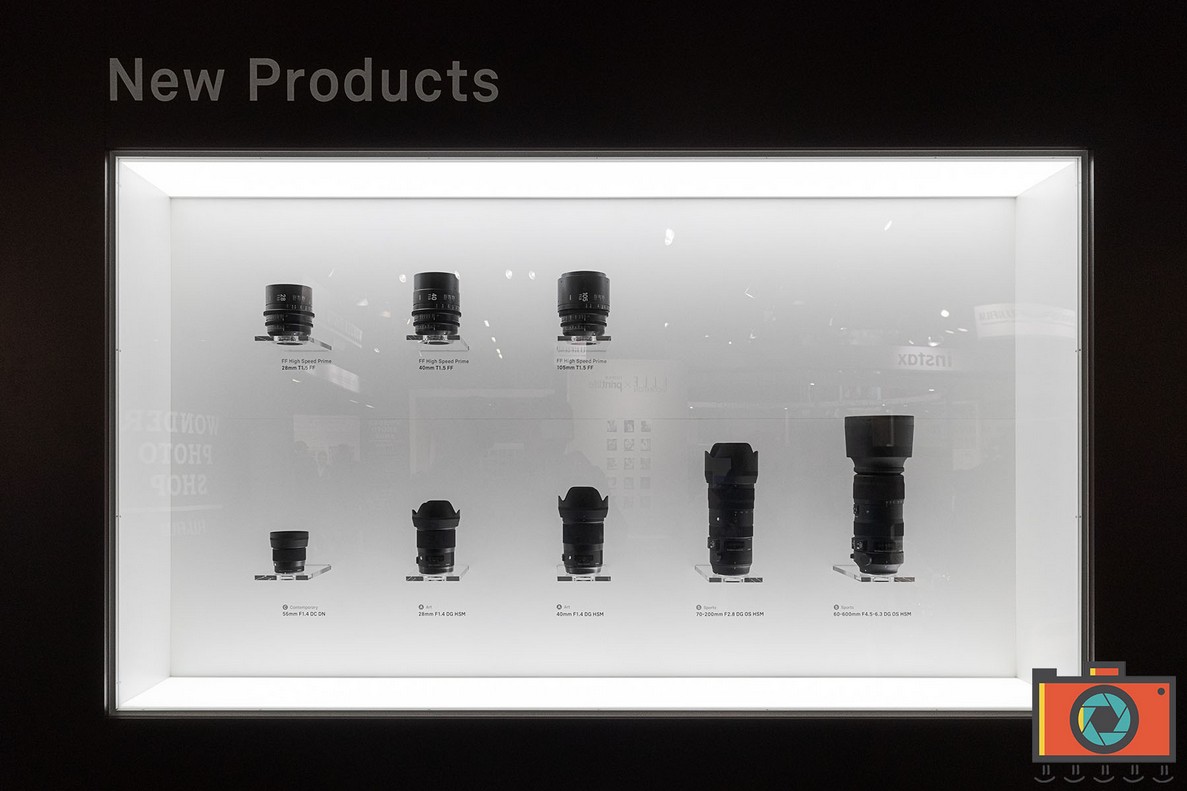 Sigma at this edition of Photokina has not spared on the announcements of novelty and it presented 5 new lenses! Sigma 28mm f/1.4 DG HSM Art, one of the ART that still was missing! Sigma 40mm f/1.4 DG HSM Art, this lens is instead an unprecedented, therefore interesting, however it has an important weight from 1200g! Sigma 70-200mm f/2.8 DG OS HSM Sports, long-awaited lens, promises performance and sharpness from TOP of the range! 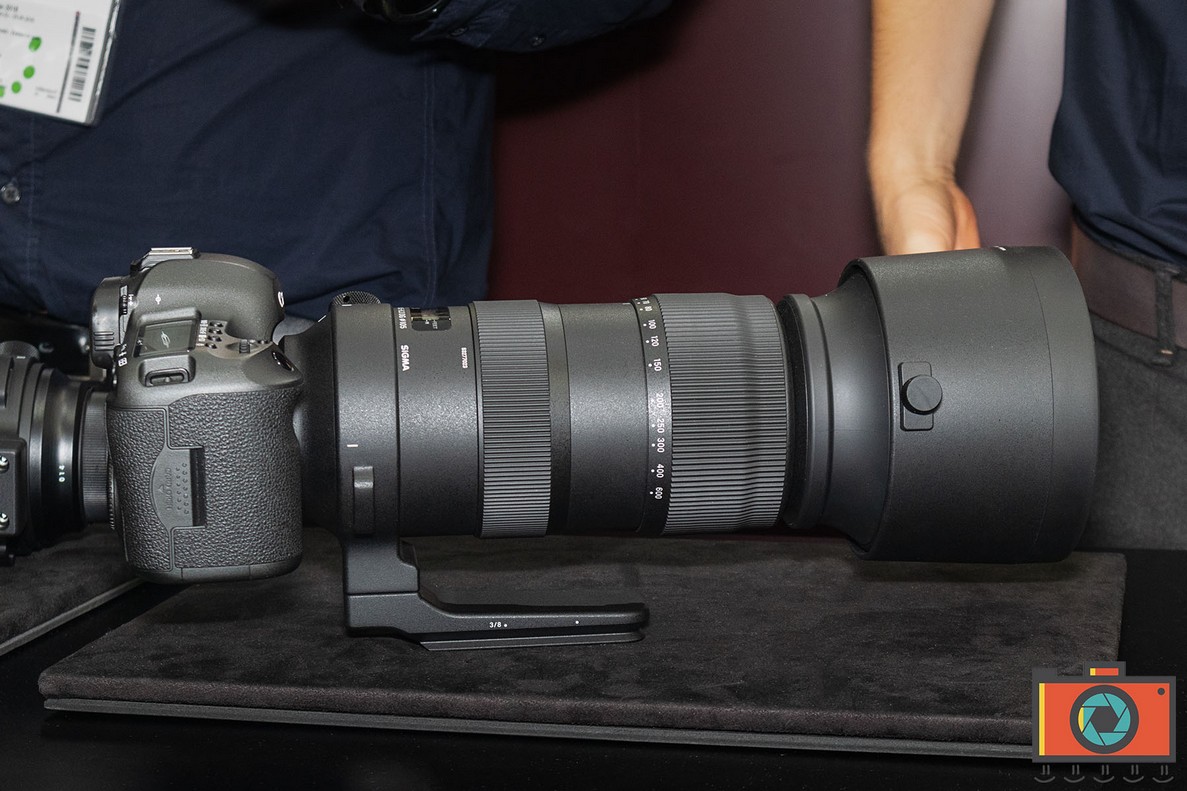 Unpublished and extreme lens, which allows you to have a focal lengths from 60mm up to 600mm, all in one lens! A dedicated article will follow with downloadable test photos. 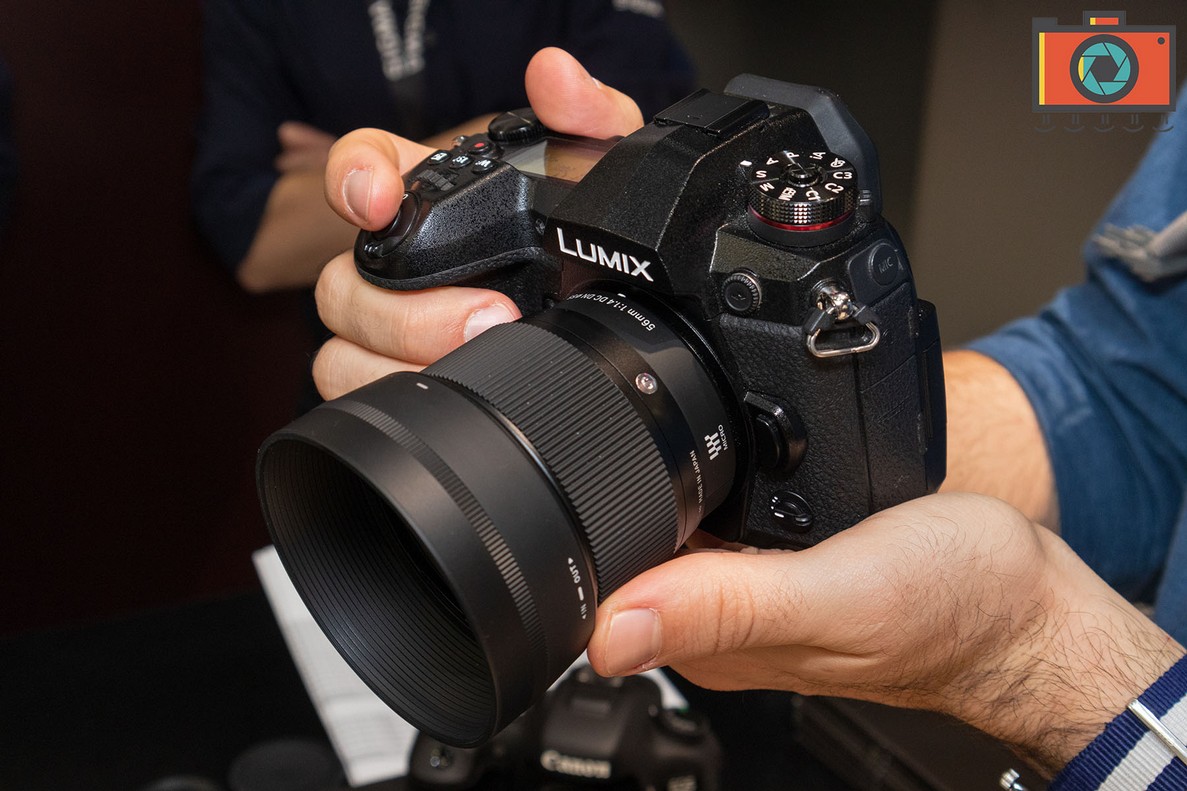 Unprecedented lens for Sony APS-C mirrorless, micro-4/3 and L-Mount. It can be compared to a luminous 85mm on FF system. For the lovers of the reduced size, surely a lens to be considered both for focal length and for small dimensions.
FUNNOMETER (first impression): 4/5 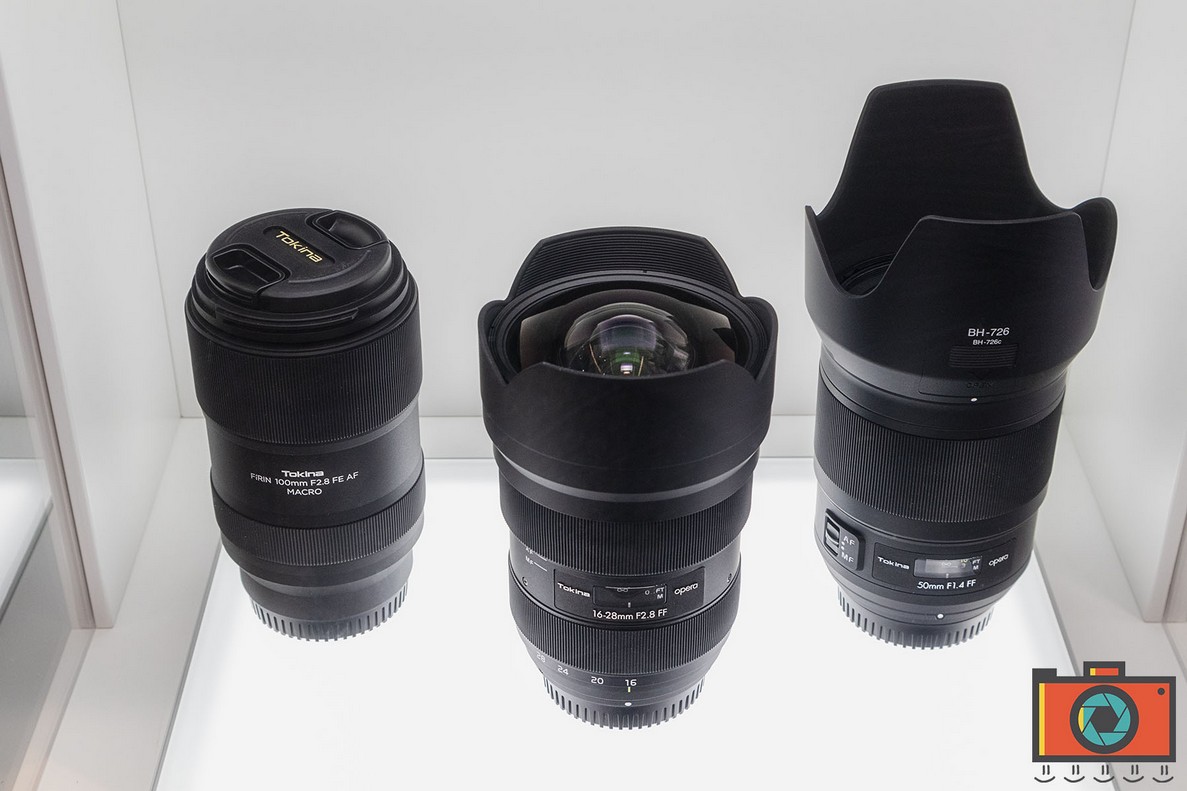 These lenses by Tokina are not part of that photo gear that deserves to be counted as crazy and/or outside the box. However, although in shadow compared to other brands, Tokina produces lenses more than good and they are also trying to slowly renew themselves. So I decided to dedicate a little space here.
In the picture there is a triptych of new lenses. From the left, the new Tokina Firin 100mm f/2.8 Macro FE AF for Sony FE, the new Tokina Opera 16-28mm f/2.8, which confirms the impossibility to mount screw filters as for the model now on sale Tokina 16-28mm F2.8 AT-X Pro FX and finally the already announced Tokina Opera 50mm F1.4 FF. 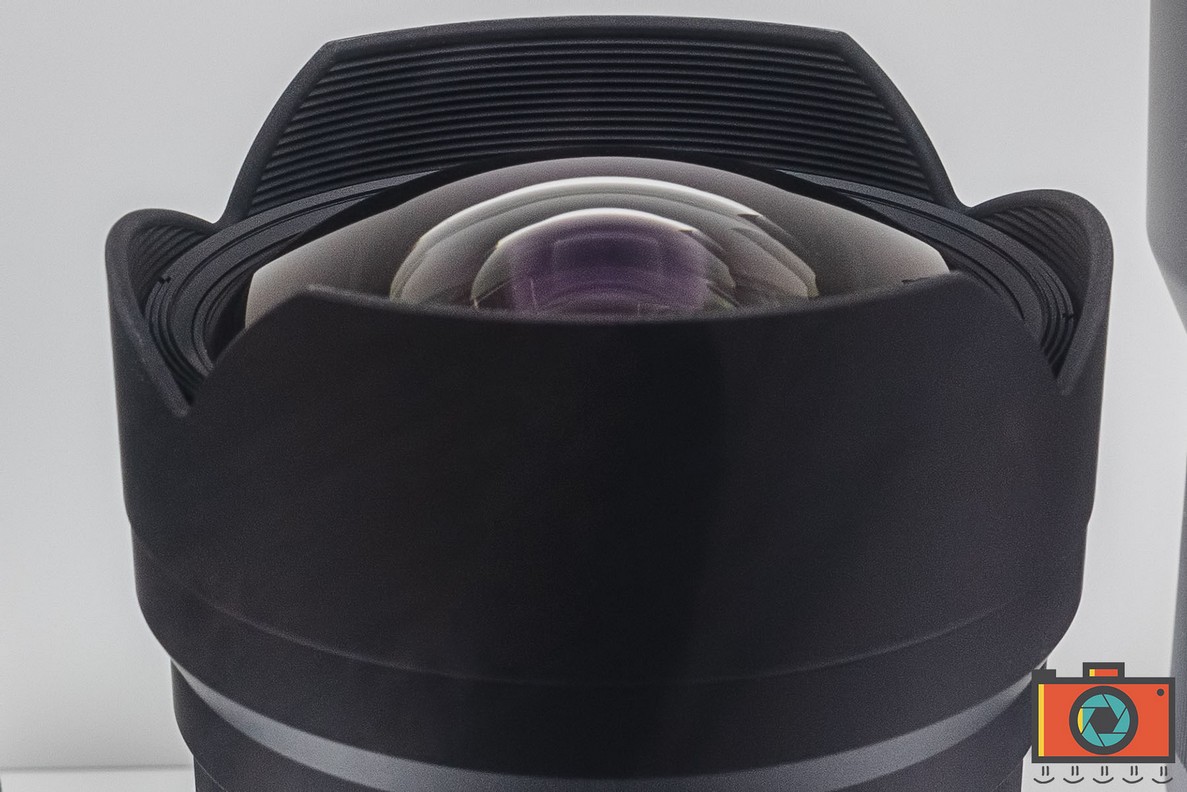 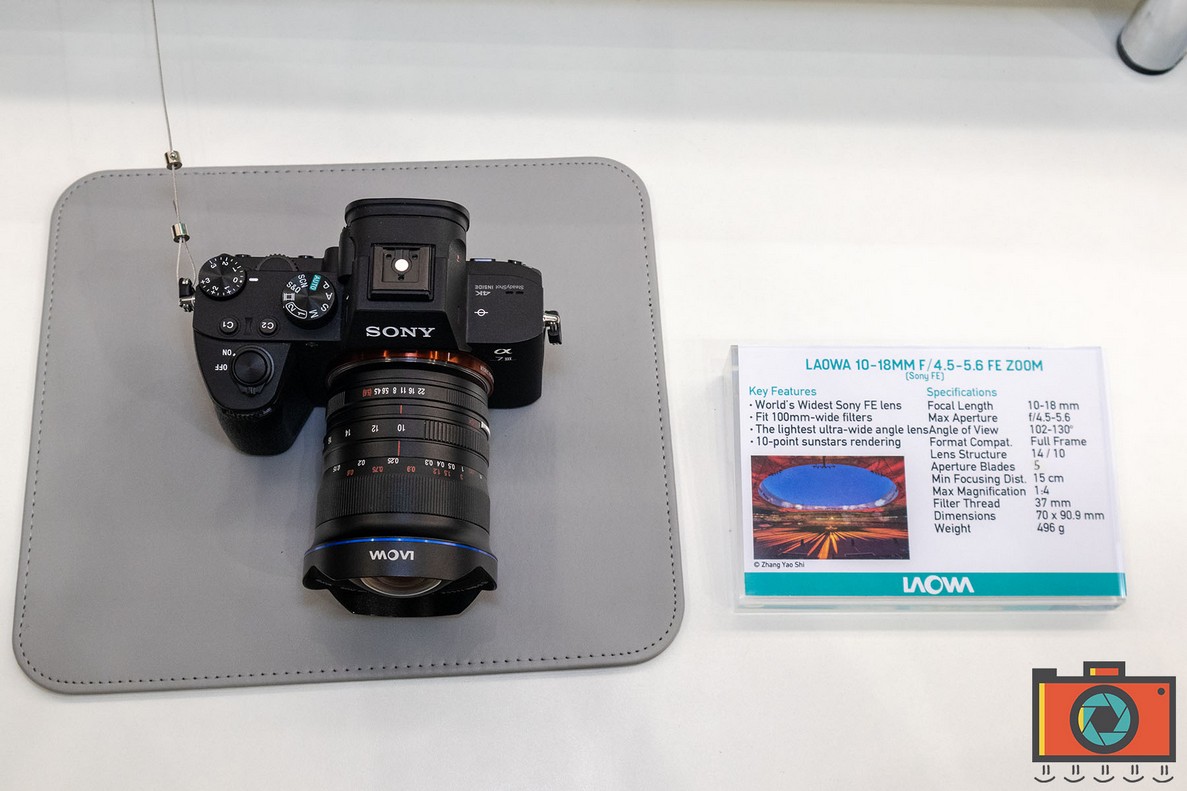 Very interesting ultra wide-angle zoom this! It is not "Zero-D" (therefore zero distortion) like the wide-angle ones that gave Venus Optics Laowa notoriety, but in any case on the market there is nothing like it! At 10mm it's a really extreme ultra wide-angle, it's rectilinear (it's not a fisheye) and absolutely not easy to use. However, this lens compared to a fixed ultra wide-angle remains very usable, thanks to the zoom that extends up to 18mm. Weight (less than 500g!) and really small dimensions are a pleasant addition to the excellent characteristics of the product. Only limit, it is only for Sony FE.
FUNNOMETER (first impression): 5/5 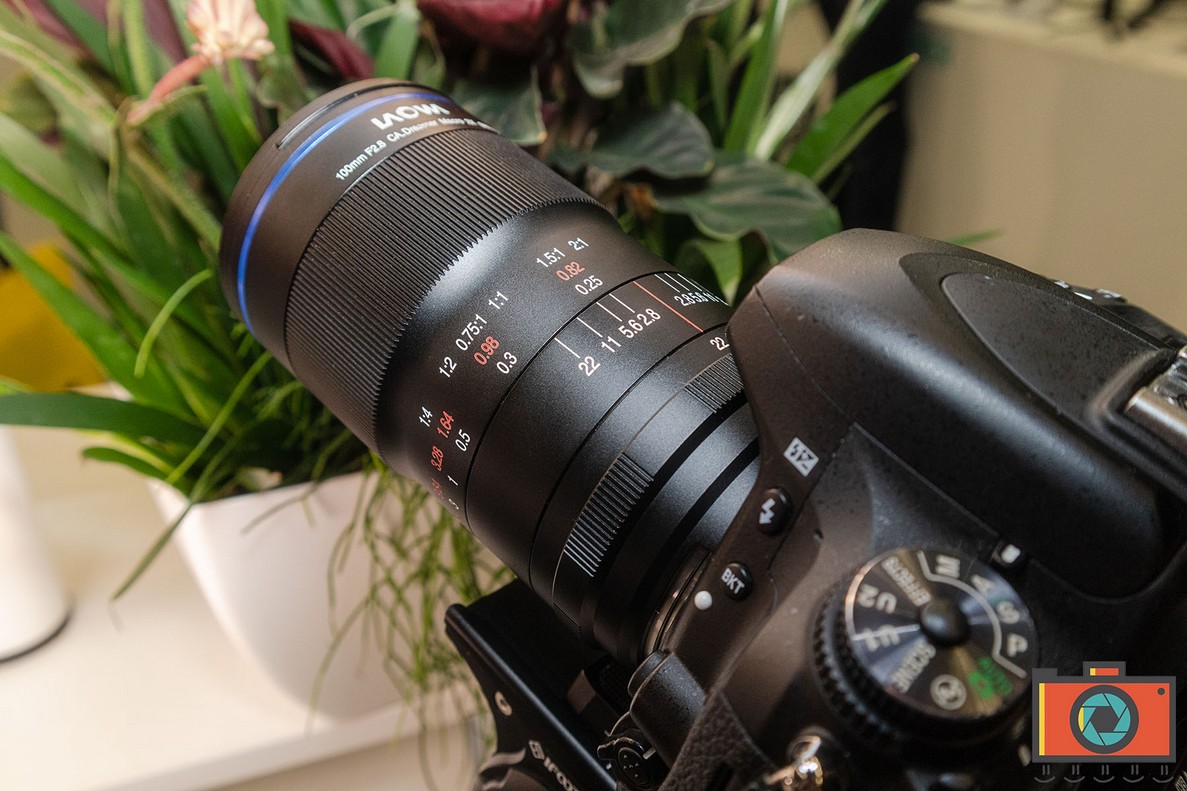 Venus Optics Laowa in addition to ultra wide-angle has another workhorse, the macro lenses! With an eye to extreme lenses and this lens is no less pushing up to a macro with a 2:1 ratio! The really interesting thing about this lens is that it is declared APO and from an apochromatic objective an excellent correction of chromatic aberration and a great sharpness is expected. Characteristics that makes this lens very appealing to an enthusiast of macro photography. The only against detected it's a minimum aperture of the diaphragm which stops at f/22.
FUNNOMETER (first impression): 4/5 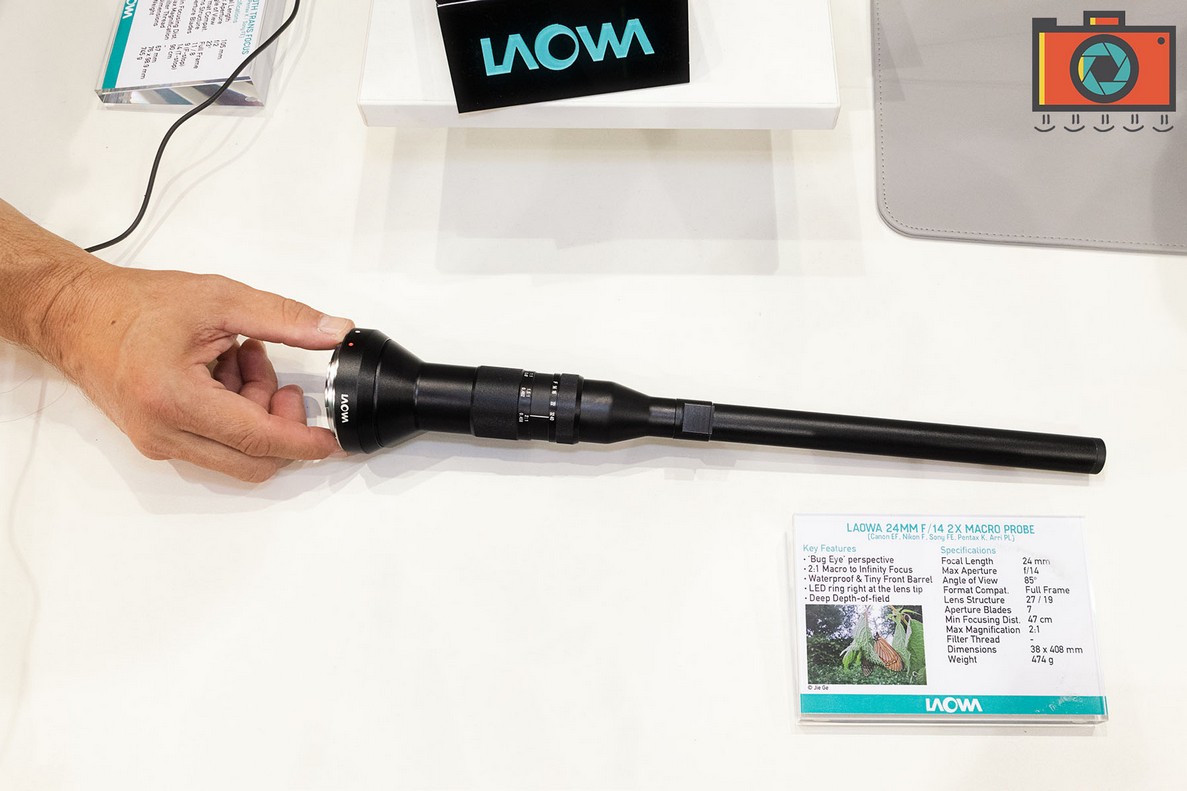 Ok, this is the craziest of the lenses presented at this Photokina 2018! As the name implies, the lens is a sort of probe, it has important dimensions, it is very long! But it allows you to get photos / videos before totally unthinkable, thanks to the water-impermeable end and equipped with LED ring! The lens reaches a macro ratio of 2:1 and is wide-angle, which allows to further contextualize the subject in the surrounding environment! 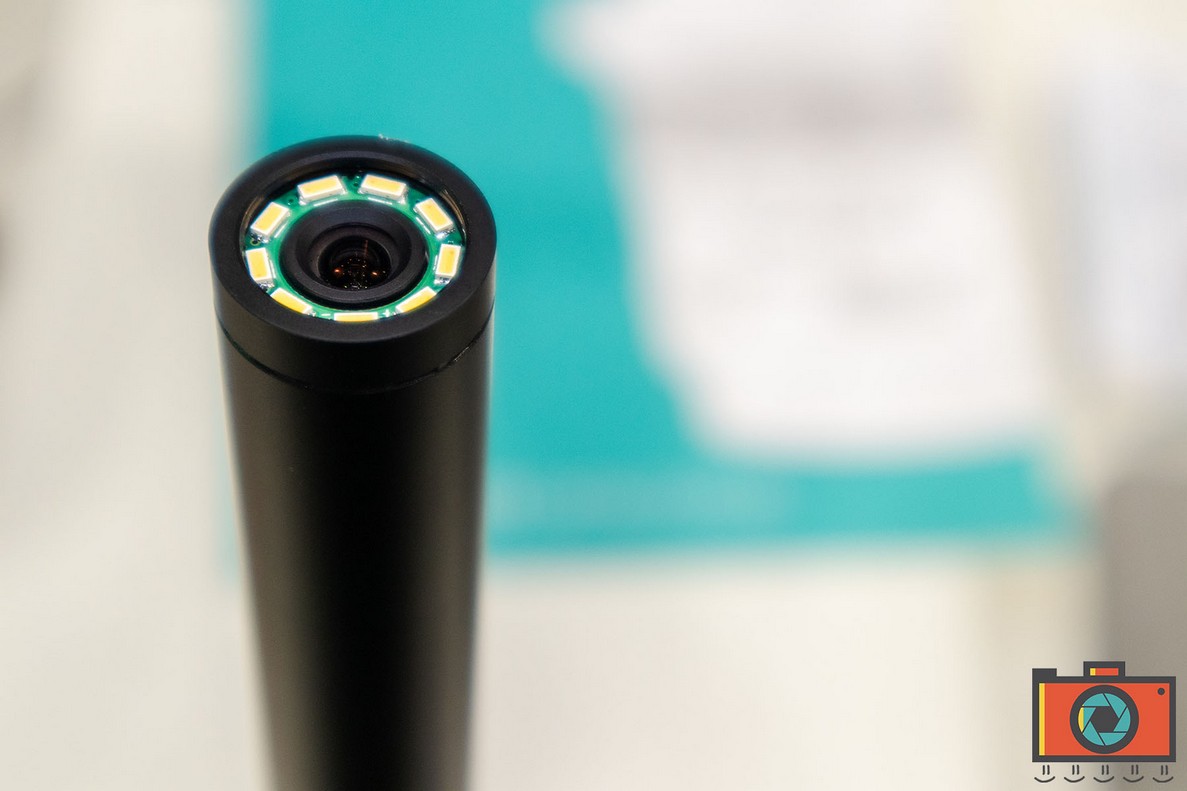 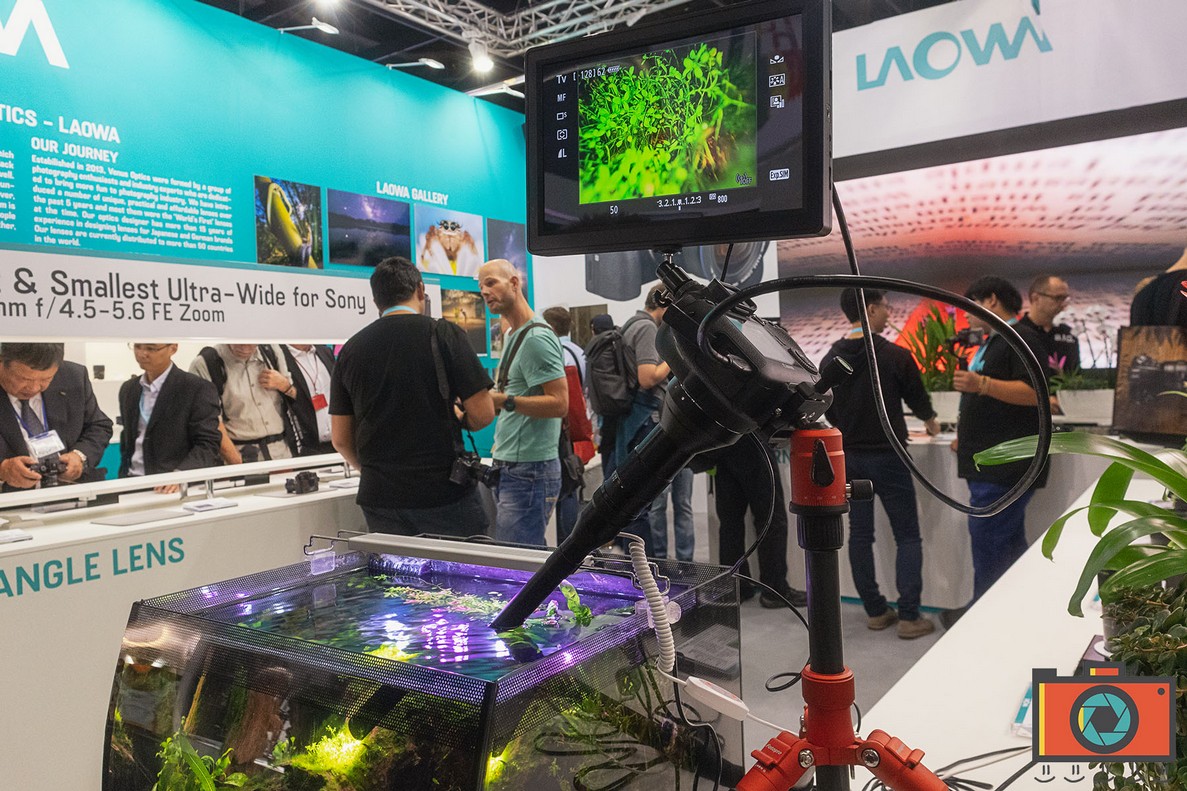 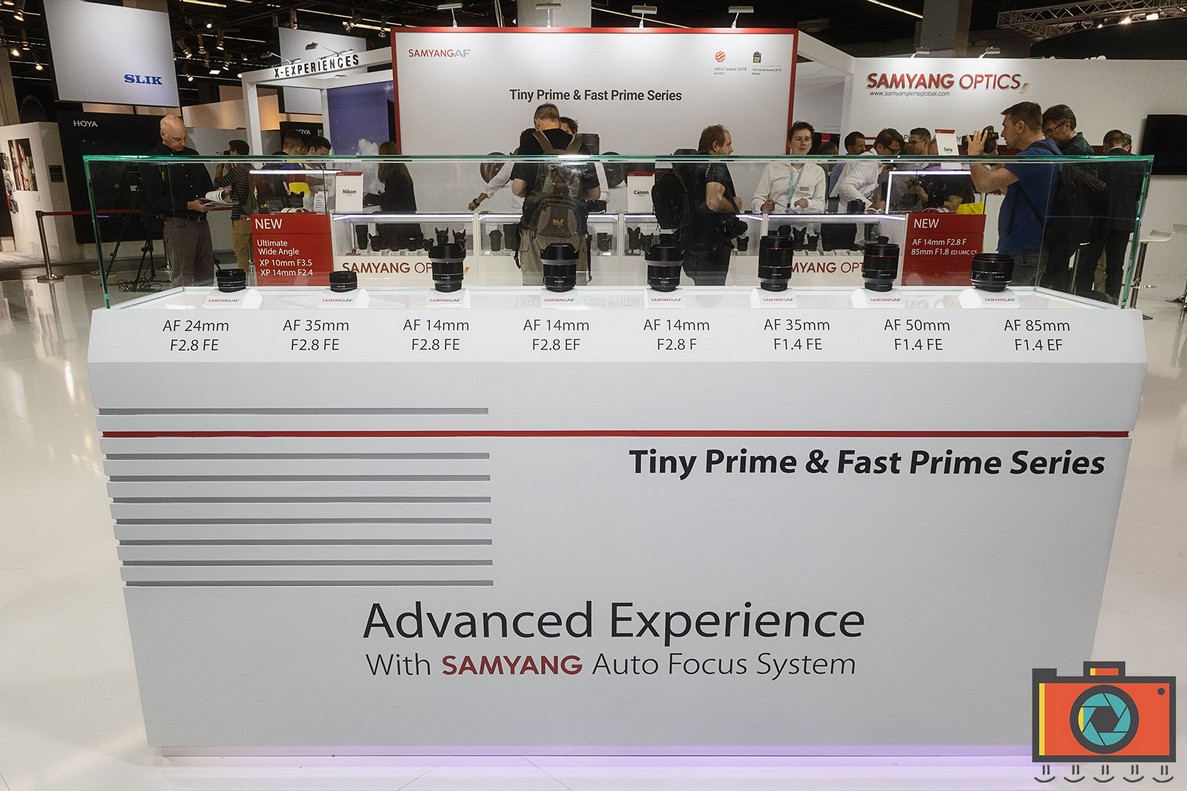 [ Samyang/Rokinon group photo ]
Samyang/Rokinon did not want to stay behind, for this reason also this brand presented many innovations! Now the brand is focusing on the new fixed, bright and compact AF lenses. In the picture you can see the exposure of the entire range and a careful eye can notice in the sides of the image two times the word NEW. 4 are the novelties presented: the Samyang/Rokinon 85mm f/1.8 ED UMC CS, manual focus telephoto lens for mirrorless APS-C; the Samyang/Rokinon AF 14mm f/2.8 F, with F-mount for Nikon (already available for Sony FE and Canon EF); Samyang/Rokinon XP 14mm f/2.4, wide-angle ultra-wide manual focus PREMIUM and very bright.
The most intersting is a new lens, a ultra wide-angle PREMIUM manual focus. Rectilinear (not a fisheye) and it is the most extreme for DSLR full frame! With its wide open of f/3.5 it is also relatively bright. If it will have a good results with the coma, this is the Samyang/Rokinon XP 10mm f / 3.5 will certainly be another interesting lens for those engaged in landscape astrophotography with FF cameras!
FUNNOMETER (first impression): 4.5 / 5 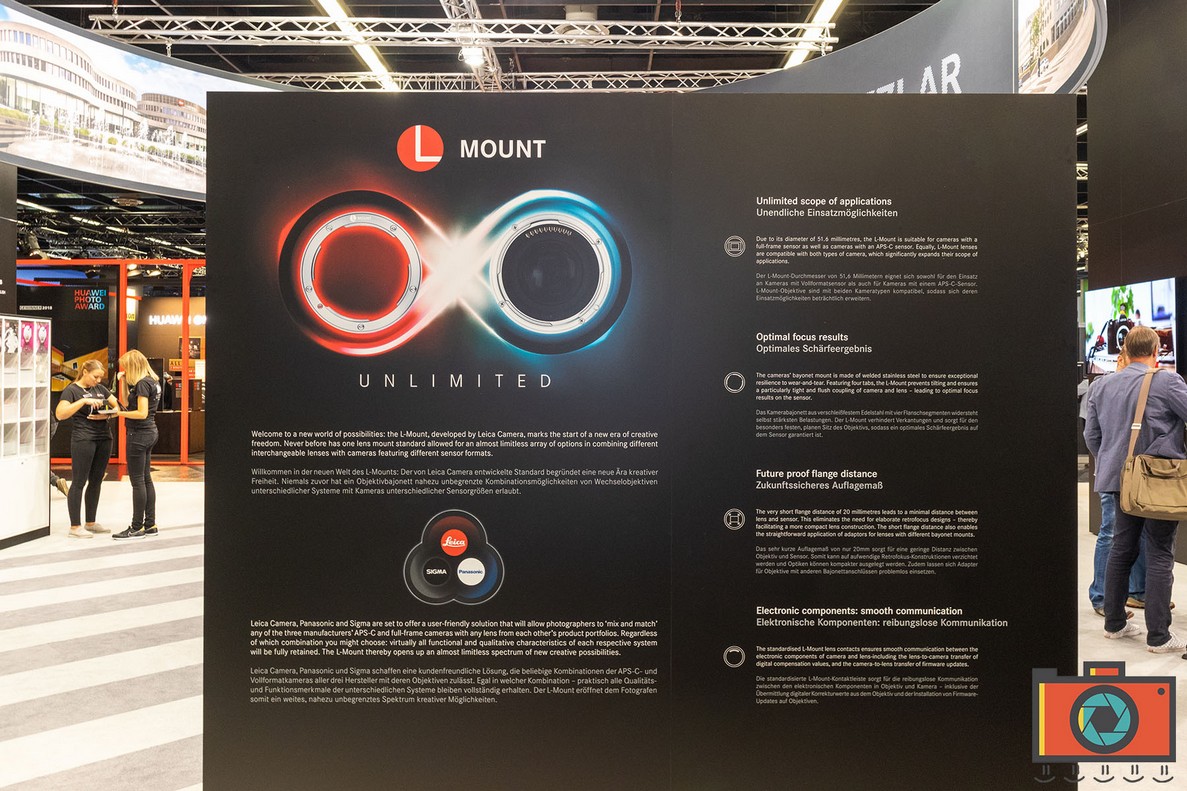 [ photo "L-Mount Alliance" poster ]
The title already says everything, in the coming months / years we will see concretely what new photo gear will be born thanks to this alliance!

Last but not least the 3 new full frame mirrorless by Canon, Nikon and Panasonic! 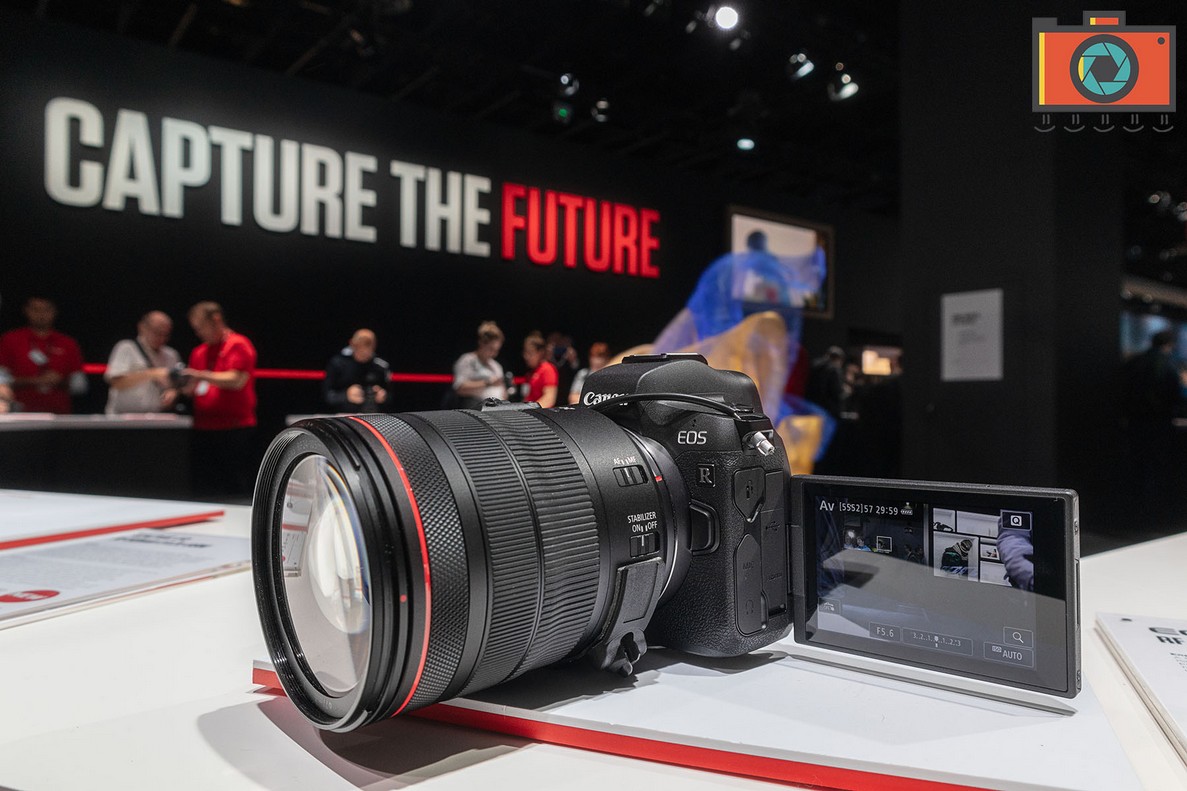 The Canon EOS R, will follow a dedicated article on this new system. In short, it is Canon's first full-frame mirrorless, equipped with a 30.3-megapixel full-frame CMOS sensor, very fast AF at 5655 points! The camera buffer in burst mode is very good, pity only the speed of the burst itself equal to 5 FPS x 47 RAW with continuous AF. Articulated display, excellent electronic viewfinder of 3.69 million points and 4K @ 30 FPS video (but in crop 1.74x). Among the many interesting features the mechanical shutter that automatically closes with each lens change. This is a good thing to avoid the dust on the sensor during the lens change! 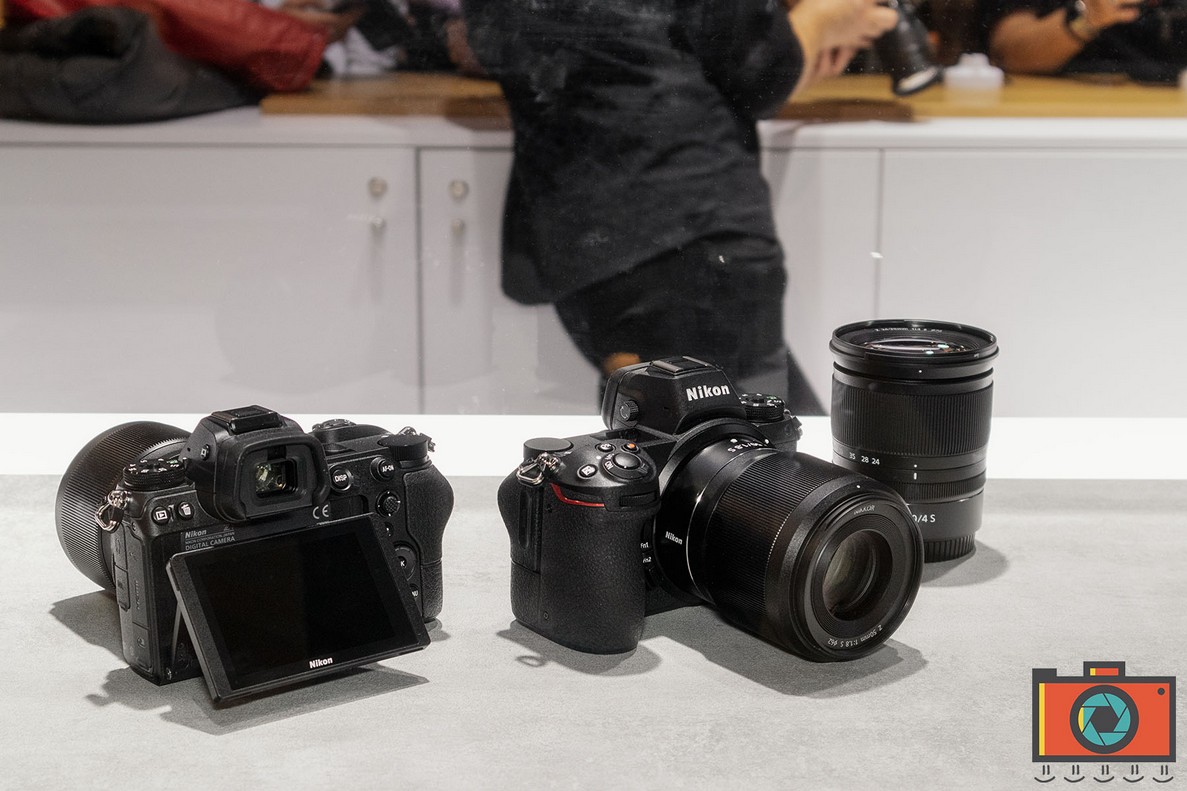 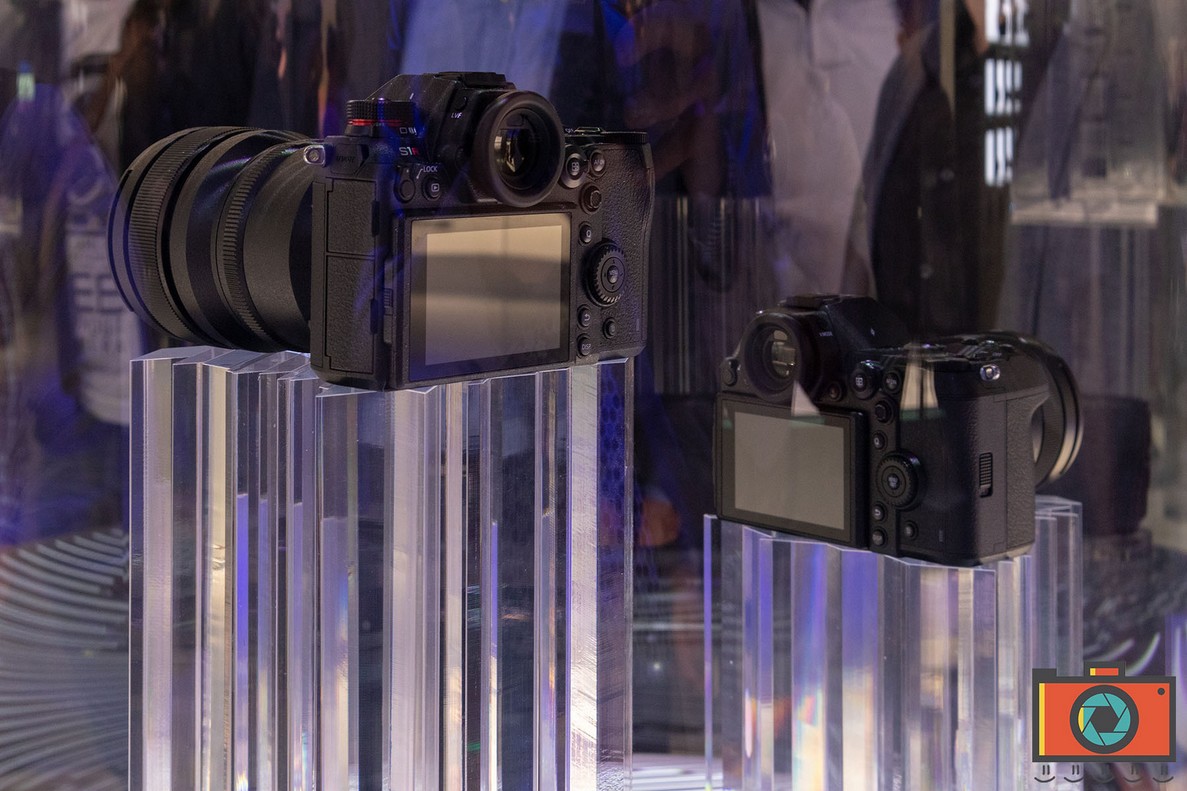 One of the unexpected news of this Photokina 2018. Panasonic has announced 2 full frame mirrorless, the Panasonic Lumix S1R and the Panasonic Lumix S1 both with the new L-Mount! Professional bodies, stabilized, with articulated display and large electronic viewfinder, AF at high speed and compared to the corresponding Canon and Nikon these Panasonic will have the dual memory slot XQD / SD and the ability to record video at 4K @ 60FPS! The S1R will have a 47-megapixel full-frame CMOS, while the S1 will have a 24-megapixel full-frame CMOS.

Thank you for reading this far. If you like it, let me know in the comments which of these news of Photokina 2018 have you most appreciated or if you liked this post!
In addition, if you wish, do not forget to subscribe to the newsletter, you will always be updated (1/2 e-mail per month) and in the future there will be useful and exclusive content for members only. It would be nice if I were you too! THANK YOU! 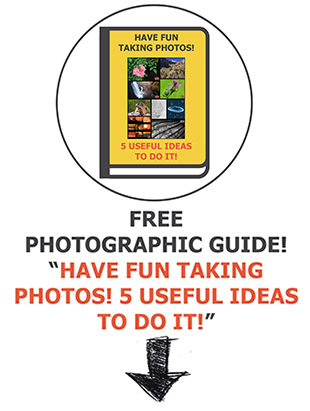 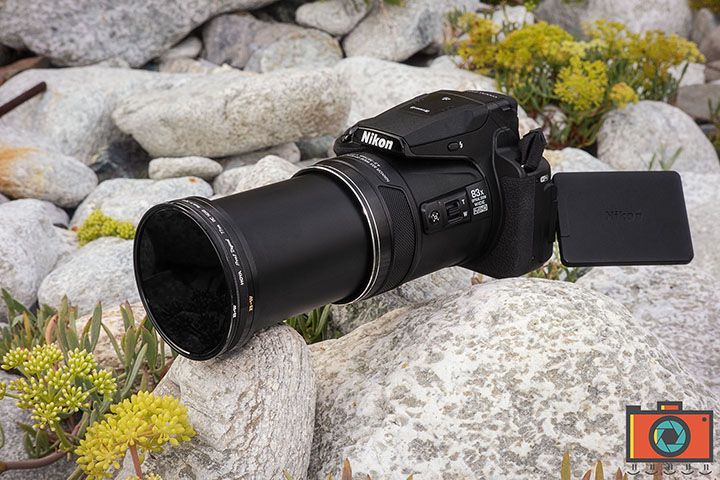